In the Study with the Wrench : A Clue Mystery, Book Two by Diana Peterfreund 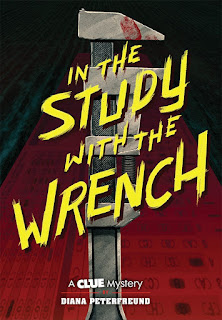 The Headmaster of the school was murdered and many students didn't return.  Of those that did, the schoolwork goes on.  Orchid, Vaughn, Scarlett, Peacock, Plum, and Mustard returned and the other students call them the murder crew because they found his body.  Mrs. White has been jailed as a killer.

Amulet Books and Edelweiss let me read this book for review (thank you).  It has been published and you can get a copy now.

Then there is another staff murder and the mystery crew decides they better investigate.  One of them is an actress who is hiding under a false name.  She has a stalker after her.  Everybody in the crew has some sort of secret.  As they work with each other, they find their weaknesses.  They know they didn't kill anyone even if the question gets asked every now and then.  There are romantic attachments growing.

When Orchid starts finding things missing from her room and then being there later, she's pretty sure her stalker is there.  She's right and she has a final showdown with him.  Who will win, Orchid or her manager who is stalking her?

Email ThisBlogThis!Share to TwitterShare to FacebookShare to Pinterest
Labels: Book Faerie, book review, Diana Peterfreund, In the Study with the Wrench : A Clue Mystery Book Two