MAGICAL MEANDERINGS: A Collection of Short Fiction by Irene Radford 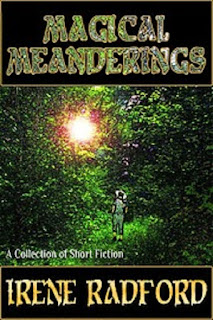 This was a fun read.  If you like fantasy and pixies and fairies and the like, you'll love this book!

Library Thing and the author shared this book with for a review (thank you).

This book is filled with short stories about everything magical.  All of the stories have a positive spin.  I liked them all.

The only bad thing is that you'll have to put it down and do something else or you'll read it all in one sitting.

Why not take a trip away from the worries of the world and read about the magical adventures in this book? 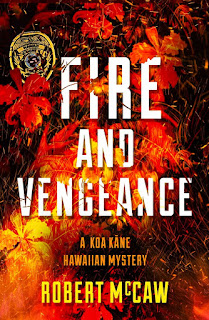 Koa is a cop who is no angel.  He never told anyone but he had murdered a man when he was younger.  Now, when he finds someone dead, he feels bad and still has residual guilt that shows up.  When a school suddenly explodes and sets itself on fire, they find dead students and dead teachers.  Who built the school over a fault line from a volcano?

Oceanview Publishing and Edelweiss let me read this book for review (thank you).  It has already been published so you can get a copy now.

The school is forty years old but as they ask questions they find that those involved in the building are still on the islands.  The worst part is that someone is killing the people involved so long ago.

This turns into a complex case.  The governor, the mayor, the head of DOE are all suspects.  Someone hired the hitman.  No one will tell him anything.  As he digs, he finds out they were all involved in a death forty years ago.  The ones they thought might tell are the ones that are dead.  Then he gets taken off the case.  He doesn't quit though.  Murder doesn't have any statute of limitations.

Everybody uses everybody.  He has to do a few shady things to get to the truth, but he does.  He finds they have been stealing money, too.  There's a lot of corruption to sort out, as well as solving a couple of murders.  Makes you wonder why we trust officials...

One of Our Own : A Gregor Demarkian Novel by Jane Haddam 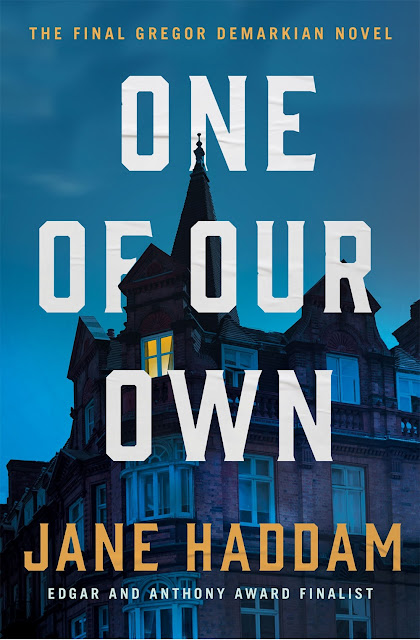 This story is complicated and complex.  It deals with problems of today and doesn't have good outcomes for most.  It holds your attention.

Minotaur and Edelweiss let me read this book for review (thank you).  It will be published November 17th.

Gregor has retired.  He and his wife have just taken a foster boy on.  No one knows where he came from and they haven't found any relatives.  He's Spanish.  He also is trying to eat to make up for the times he was hungry.  He's a bottomless pit.  He also bought the priest's dog with him.  The priest says he can have that one, he'll adopt another.

Then Gregor has been asked to help on a case.  It seems a van fishtailed on a slick street and the back doors opened and a garbage bag fell out.  There is an old woman in the bag and they recognize her.  She was hit on the back of the head and is in a coma.  Various sections of the city are little settlements of refugees from other countries.  This happened in the Spanish part of town.

Gregor starts asking questions.  He finds it easier to get answers now that he has no official standing.  When he visits her apartment, he finds a dead man in it.  It's the Superintendent who was trying to get her to take a smaller unit.  Just what happened here?

He finds that the man who owns all these apartment building uses coyotes to bring him illegal immigrants  and he gives them jobs and doesn't pay them much.  That cuts down on his overhead.  He goes to talk to the owner and finds out what he wants to know.  But he can't prove it...

Email ThisBlogThis!Share to TwitterShare to FacebookShare to Pinterest
Labels: Book Faerie, book review, Jane Haddam, One of Our Own : A Gregor Demarkian Novel

Shelly Struggles to Shine (The Derby Daredevils #2) by Kit Rosewater 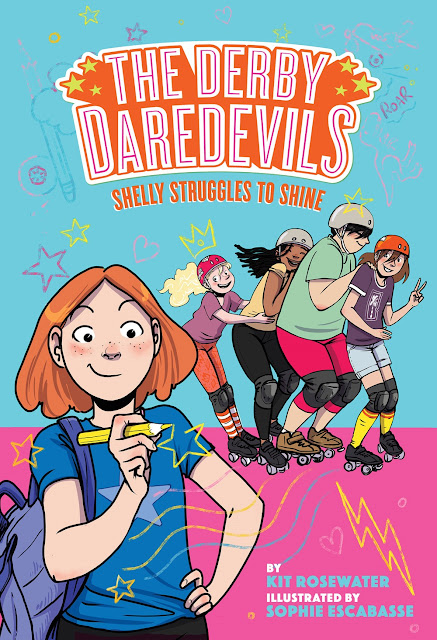 Shelly is part of a group of schoolmates that play in the Derby.  All the others had special skills.  She doesn't think she has any...

Amulet Books sent a copy of this book to read for review (thank you).  It has been published and you can get a copy now.

The illustrations go with the story line well.  Sophie Escabasse is the illustrator.

What Shelly can do is draw.  She draws the team and wants to find them some costuming materials to make them stand out.  They have a tournament coming up and she wants to help them win.

Her first attempts don't turn out so well.  She even has to sit in the penalty box for one bout.  That gives her time to think of an alternate plan.

Her second plan works well.  Will she get picked as a shining star?

Hans Christian Anderson The Journey of His Life by Heinz Janisch 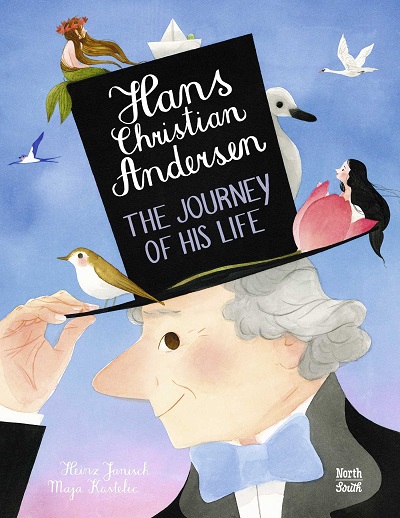 I think I've read almost all of Hans Christian Andersen's stories.  This is the story of life with a bit of fairy tale thrown in.

North and South sent me a copy of this book to read for review (thank you).  It has been published and you can get a copy now.

A little girl and her mother are going to another town on the stage and there's a man already there when they board.  The girl looks him over and after a while asks him if he's old.  Her mother tells her you don't ask questions like that but Hans tells her it's alright.  He tells the girl he's still a young boy inside but. yes, he's getting old.  When he tells her he writes fairy tales, she asks him to tell her one.  He tells her more than one...

Maja Kastelic did the illustrations and they add to the story.

This is a combination of facts and fairy tales and it's fun to read.

The Well of Ice: Series: An Inishowen Mystery by Andrea Carter 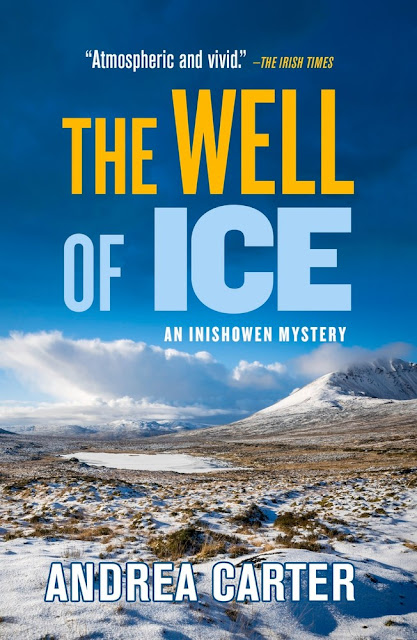 Benedicta “Ben” O'Keeffe is working hard over the holidays.  Several people are buying houses and hope to be settled by Christmas.  This means she has no time to lose...

Oceanview Publishing and Edelweiss let me read this book for review (thank you).  It will be published November 10th.

Ben goes to Dublin to see her parents and runs into the man who murdered her sister.  He's finally out of jail and it appears he was looking for her.  He acts like he's been rehabilitated but he threatens her as she leaves.

Her boyfriend is a cop so she has him check with his parole officer.  He was originally staying in London, but he's paid for his crime so there are no limitations.  She hates that he's around and worries he means her harm.

She and her boyfriend go out for a walk and find a missing woman - dead.  She was strangled.  The story gets pretty complicated from this point on.  It seems Carole (the dead woman) was married to the son of the owner of the nearby cabin.  She never got divorced, she married again and had two children.  The evidence points to the son but he's been dead for a couple of months, it couldn't be him.

They find that Carole and her husband, George are both fooling around with other people.  The pub where Carole worked burned down leaving the owner devastated.  Someone set it on fire...

As they ask questions, things are complicated and it's not clear who killed the victims.

Ben is finally confronted by the man who killed her sister and he intends to kill her also.  Will she live or die? 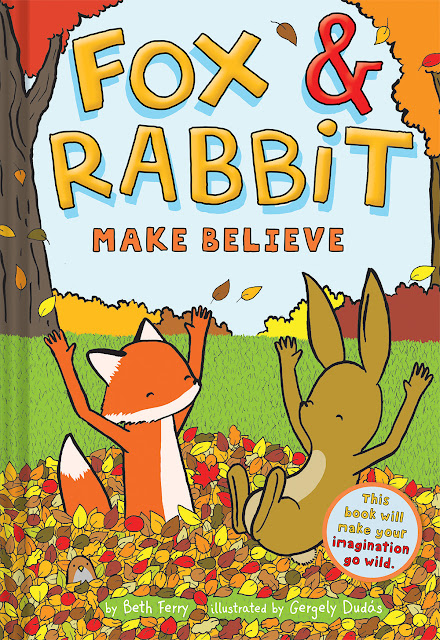 Does your child have a good imagination?  This book will fascinate any child as he/she watches the characters imagine impossible situations and they always get out safe.  The illustrations are by Gergely Dudas abd are bright and clean.  This is a graphic novel.

Abram's Books sent me a copy to read for review (thank you).  It's beeen published so you can get a copy now.

This is a chapter book with several stories to enjoy.  There is an owl, a hungry bird, a turtle and more to help our main characters out.  I enjoyed reading these stories.  I bet your young ones would, too!