The Man Who Didn't Fly by Margot Bennett, Martin Edwards 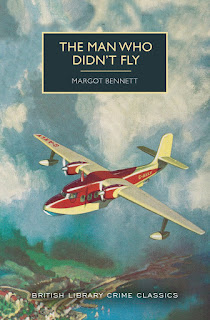 Four men were going to fly to Dublin on a chartered flight.  Only three men showed up and they never made it to Dublin, they went down in the sea.  The police visit the place where they had been rooming and started asking all kinds of questions.

Poisoned Pen Press and Edelweiss let me read this story for review (thank you).  It will be published on January 5th.

The had a variety of personalities amongst the men as well as the family.  The father was going to give one of them money to invest.  He had dreams of great returns.  His daughters tried to stop him but to no avail.  One of them is being courted by one of them.  He's a poet.  Then there was the man that is following the one who got the father's funds.  He had stolen money from his mother and he intends to get even.  The young man who becomes their cook was a thief before.  All the men have secrets.What the cops want to know is who wasn't on the flight (they were one man short) and did he sabotage the plane?

As lots of facts get bandied about you wonder how they are ever going to get it straightened out.

The ending is ironic and answers where the fourth man disappears to but it doesn't explain the plane crash.

There are just a lot of men trying to get ahead how ever they can.  And no one makes it...