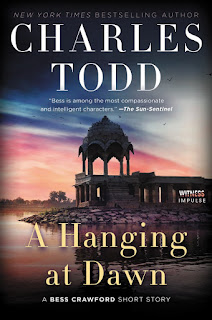 This is a story of Bess while she was a child.  Her parents took in a boy who was full of anger and tried to settle him down.  He teaches Bess, how to ride ride a horse and protects her.  They are living in India.

Witness Impulse and Edelweiss let me read this book for review (thank you).

The family keeps Simon's secrets.  His parents were killed early in his life and his grandfather didn't want him.  Due to his size and manner he joins up in the army.  Bess' father is a commander in the army and he trains Simon who is smart and learns fast.  It doesn't take long before he's promoted.

He's acting as a guard on the royal family.  The child has lost his rattle, so Simon backtracks and finds it.  Then they find one of the traveler dead with the riches he was guarding gone.  They arrest Simon.

There were no witnesses.  But Simon is English so it had to be him.  Both parents speak in his favor.  The father even gets the military involved but it matters not.  They sentence him to hang...

Can the family save him?