The Preserve by Ariel S. Winter 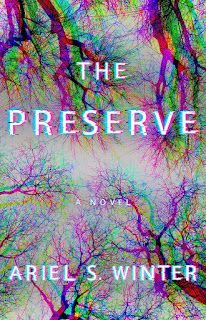 This is an interesting tale.  There are more robots than humans...

Atria and Edelweiss let me read this book for review (thank you.).  It will be published November 3rd.

The police chief in the preserve is human and took this position to get away from serious crimes.  He mostly deals with drunks.  But when he takes a phone call he finds murder has struck even in his safe haven.  The murdered man was part human, part cyborg.  He has no suspects, so he sends his officers out to ask questions.

Then he learns that someone is killing robots.  Now it's really turning into a difficult case.  He calls in his old partner and asks for his help.  He's a robot.

They try to follow up on people and robots both.  The deaths of the robots are making the survivors wonder if they need the humans.

There are a lot of politics involved, illegal activities and more as they keep digging.

Will he be able to keep his wife and child safe?  What about him and his partner?

This is a look at how the world could be in the future and it's chilling.  One thing this book isn't:  boring!