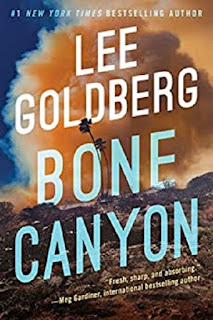 When a wildfire hits the Santa Monica mountains, it doesn't just burn trees and houses.  They find human bones in the aftermath.

Thomas & Mercer and Net Galley let me read this book for review (thank you).  It will be published January 5th.

A partial skull is found in the blackened ground.  As they continue searching the ground, they find that two women are dead.  Eve learns there was another woman with the younger woman and she tracks her down.  The lady talks to her and gives the clothes she was wearing that night but she doesn't want her name brought up.

Eve goes along with her assumptions with how it happened.  She knows the girls were raped and that it was cops that did it.  They were surfing, the girls started talking to them and drinking and then they passed out.The men took advantage of the situation.  But Eve is a cop, too, and no one wannts her to pursue the men.  She does anyway.

They try to discourage her by ruining her car with dog poop and urine.  They run her off the road in her rental car trying to kill her.  And she still persists despite the threats.

Then she realizes they are not the killers of the women.

The killer was a surprise.  I didn't think he was a suspect.

This is a good mystery with lots of twists and turns.  It's a good thing her partner is there.  He helps protect her.

You won't be bored.