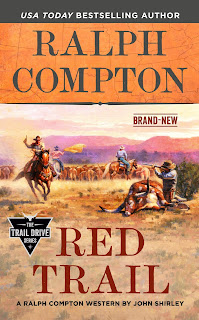 Mace Durst has cattle he has to drive to the agent that gave him a good price.  They can't use the regular trails because the Comanches are hostile and they love to steal cattle.  So he decides to take a little known trail that is hazardous but not inhabited by Comanches.  It's not safe either.

The problem is he needs the money.  They are behind on payments for the ranch.  So he gathers some men and heads out.  He doesn't realize that one of his hands will be paid for killing him...

Berkley and Edelweiss allowed me to read this book for review (thank you).  It will be published on December 15th.

Besides high water, animal injuries, and picking up a few men on the way, there are those that want to steal his cows.  Not Indians but white men.  It's a hard trail ride.

At the ranch, his wife is dealing with a neighbor who wants her ranch and will do anything to get it.  That's why there is a killer in Mace's crew.  She runs him off the property with a rifle.  But he comes back, with some of his men.  And he blackmails the banker into calling the loan so she will lose the ranch.  She's no shrinking violet and defends her ranch.

You're not sure if Mace will be back, the threats get worse at the ranch, and the cattle drive is difficult.

It's a good western, there's bloodshed but the rancher and his wife stand firm.  It was a good read.