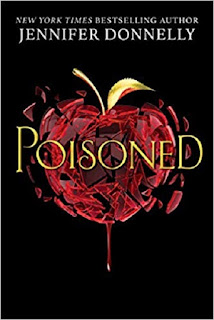 Sophie went out for a ride into the forest with the huntsman.  He said he had some place special to show her.  What he showed her was his knife.  Her stepmother had ordered her death.  He cuts her heart out and goes back to the queen.

Scholastic Press sent me an ARC of this book to read for review (thank you).It was published October 20th.

Sophie's father, the King, died in the war and she was to be the next queen when she came of age.  Her stepmother thinks she's too weak in spirit for it so she gets rid of her.

Woodsmen find her and take her to their cottage.  There one of them makes a mechanical heart and she comes back to life.  She stays with them and waits for her prince to come rescue her but he never shows.  The stepmother said Sophie was attacked by wolves.

There are two more attempts at killing her but the woodsmen save her.  Then she goes back to the castle to claim her crown.  She doesn't go alone.  The people in her kingdom, including trolls, admire her kind ways so they escort her.

Will she recover her crown or will the stepmother and the crow king (in human form) or maybe the false prince who claimed he loved her finally succeed in killing her?

Read it and see.  It's a good read for those who like fairy tales.