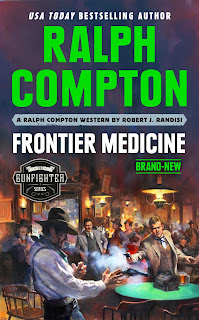 Gabriel has come west because of an ad he saw.  An older doctor is looking for a partner that can take over the business.  He meets the older doctor who is a bit crusty and crabby and they decide to share the workload.  He has a bit of trouble fitting in because folks are used to the other doctor, but when they get him in western clothes and he does so well with children, they accept him.

Berkley and Edelweiss let me read this book for review (thank you).

Gabe stays with the old doctor at first but soon moves unto an apartment above the restaurant he frequently eats at.  He's not far from the office, the saloon, and shops.

A gunslinger comes to town looking for him.  He intends to kill the doctor.  Gabe carries his gun with him in his bag.  When he goes to get it out, the gunslinger is trying to draw.  He shoots him through the bag and says the gun got caught on the bag.  Nobody believes him.  This is the second man he's killed since he came to town, so the newspaper calls him Doctor Death.

More men come after him, so he makes a deal with a gunslinger who needed medical work.  He ends the Doctor Death reputation and the good doctor finds himself thinking about marriage to one of two women.

This was a good western that kept your attention and entertained you at the same time.