A Whisker in the Dark by Leighann Dobbs, Series: Oyster Cove Guesthouse (#2) 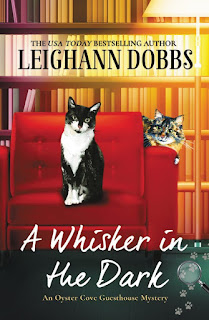 Her guest house is almost full when her contractor finds a skeleton in the wall.  It's only bones and it's 300 years old.  But he used to be the previous owner and he was supposed to have a treasure...

Grand Central Publishing and Edelweiss let me read this book for review (thank you). It will be published on January 12th.

The worst part is that the people staying at her guest house are all relatives.  They decide there might be a treasure hidden on the grounds and everyone goes out and buys shovels.  They promise to refill the holes after checking it out.

She has two cats and they try to tell her what they've found but it doesn't go well.

And then they find a current body, one of the members of the family.  He was hit with a shovel but the shovels have no blood traces on them.

The mother and her daughter decide that they would help the sheriff find the killer.  They come up with all sorts of theories but it's the cats who are the best lead.  They have found the bloody shovel.  But there's a problem when they follow him.  The killer is there and was going to hide the shovel.  And he has a gun.

Will they survive or become bones in a grave?

This is a good cozy mystery.  I enjoyed it.