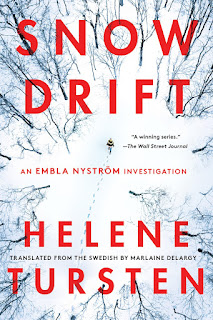 Embla gets a phone call that makes her head spin.  It's from her best friend of fourteen years ago and she thought she was dead...

Soho Crime and Edelweiss let me read this book for review (thank you).  It will be published on December 8th.

She doesn't talk long and doesn't say where she is.  Embla wishes she could find her but she's got a case to deal with.

Embla gets a phone call from one of her relatives telling her there is a murdered man in one of the cottages they rent.  When she gets there she finds she knows him.  The local cop shows up and thinks she may be the killer.  She has no ID, so it's not apparent she's a cop, too.

The victim is a gang member.  He's the leader.  Then they find one of his brothers shot outside a bar.  Where is the third brother?

As they search for the third brother, they find he has been left in a house that burned and is dead also.  Zagreb killers were taking over their territory.

She finally finds her friend but she's not very friendly.  She was married to the youngest brother.

As Embla works the case with the other cop, they begin to grow fond of each other.  Maybe the next book will have more romance in it.

They end up in a showdown with the Zagreb killers and you aren't sure how that's going to work out...