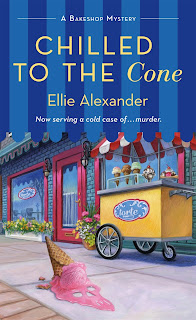 Juliet has a special opportunity to open another shop in town.  They won't serve the same thing, they'll do frozen coffee drinks and rich, cold custards.  They begin working  on the shop which is really a mess.  Her staff thinks it is a great idea and they help.

St. Martin's Paperbacks and Edelweiss let me read this book for review (thank you).  It will be published on December 29th.

Juliet's husband has come to visit.  He was on a cruise ship and she had left him there when she went home.  They still love each other but will he be happy in town?

There's an odd guy in town called the wizard.  He has some mental problems and gets accused of doing bad things just because he's strange.  Then they find him dead. Sure people were angry, but they wouldn't have killed him...

As she tries to figure out who killed him, someone sets fire to her new site and burns most of it down.  They decide to rebuild with improvements for their function. Now she has to worry about who is mad at her.

The ending was a surprise to me.  I had no idea who the killer was.  See if you figure it out.

Will her husband stay with her or go back to the sea?  He's offered a promotion.  Read it and see.