I Escaped The Donner Party: Pioneers on the Oregon Trail, 1846 by Ellie Crowe and Scott Peters 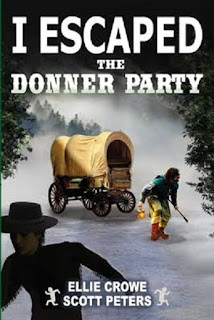 Zeke is 17 and headed out West to California, the promised land that anyone can stake a claim and live a good life.  He's part of a wagon train and is supposed to be taking care of the cow herds.This is all new territory to the people in the wagons and they don't know the danger they are heading into.

Library Thing and the author shared this book with me for review (thank you).  It has been published and you can buy a copy now.

Zeke has visions of the future but he tries not to tell anyone about it.  They think he's crazy if he does.  But this trip gives him an opportunity to use those visions a lot.

There are Indian guides, parents and children of all ages in the group.  When they come to a spot in the road where they can cut their trip down, they decide to take it.  It becomes the Donner party then.

As they struggle to climb the Sierra Nevada's mountain range, they lose stock, find themselves running out of food, and then it starts to snow...

This story is sad because not many survive.  When the food is gone and the cattle are gone, one of the men turns into a cannibal.  That's when Zeke decides to leave.

This written for intermediate readers and is based on a true story.  You'll feel like it's you shivering in the snow...

It's educational and a good read with a section at the back giving you facts about the survivors.