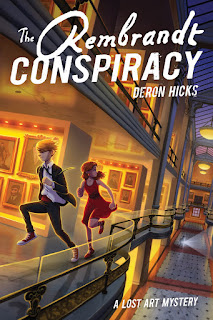 There has been one robbery already where paintings were stolen that were worth millions.  Now Art thinks the museum his father works at is next on their list.

HMH Books for Young Readers and Edelweiss allowed me to read this book for review (thank you).  It will be published December 1st.

Art has seen the same lady come into the museum several times and she always does the same thing.  But his only proof that a grand heist is about to take place is iced mocha, forty-two steps, and a mysterious woman who appears like clockwork in the museum.  He can't take that to his father.  Camille agrees it's funny and they decide they will follow her when she leaves.  Unfortunately she calls for a ride and Art thinks they've lost their opportunity.  But not Camille.  She rents a scooter and off they go.

It wasn't the safest ride but they make it.  They go into the building and see what floor she gets off on.  Then Art convinces Camille they need to find stairs so she and her friends won't hear them coming.  All is going well until they run into a  security guard from the museum.  He's not the old man he appeared to be.

They get captured and tied up with duct tape.  But Art thinks and hopes that the trick he does will save them.

It's exciting, very busy and you're not sure how it's going to turn out until the very end.  It was a good read.