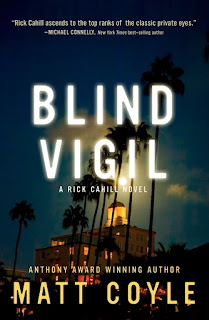 Rick got shot in the face while doing his private eye job.  He's blind now.  You can't investigate if you can't see...

Oceanview Publishing and Edelweiss allowed me to read this book for review (thank you).  It will be published December 1st.

He's been staying in his house and thinking of what he could do in his condition when a female private eye approaches him and asks him to come with her and tell if her client is telling the truth or not.  He doesn't want to be used, but she's paying him and he knows her client.  He used to work with Turk.

Turk wants to know if his girlfriend is lying to him about where she goes after work when she's not with him.  Does she have another lover? He knows she doesn't go home.

Rick and Moira decide to follow her.  They see where she goes but it doesn't look like love.  They plan to tell Turk the next day.  Moira goes over early to follow her to work and finds cops all over the place.  Turk admits he went over and had a fight with her but he denies killing her.  When they find a tie he wore once around her neck, they take him in.

While all this has been going on, Rick is having problems with the love of his life.  She lives in another town and has a big project lined up.  She won't see him often while doing that.  She invites him to move in with her but he likes the city he's in and says no.

Rick starts looking for the real killer.  He's sure he knows who it is by his cologne.  He's been close to Rick a few times.  Rick sets himself up as bait.  It works.  Who will win?  The blind man or the killer?