The Dogs of Winter by Ann Lambert Series: A Russell and Leduc Mystery (#2) 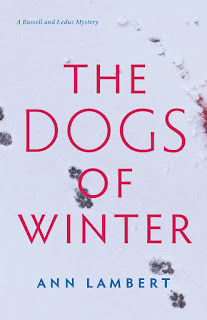 There's an awful snowstorm in Montreal that basically shuts down the city.  The next day they find the dead body of a woman.  She'd apparently been hit by a car but she died from asphyxiation.   She has a picture of a cop in her pocket with his phone number on the back of it.  The investigating officer calls him and asks if he can identify her.

Second Story Press and Edelweiss allowed me to read this book for review (thank you).  It has beeen published and you can get a copy now.

Romeo doesn't know the woman and has no idea where she got the picture.

Then they find another body, this is a man's.  Someone seems to be killing the homeless people.  Romeo wants to help track the killer down but the other precinct doesn't want his help.  He'll have to go it alone.

Romeo has a girlfriend that is ten years older than he is and she helps him.

Marie has a student who was raped and she tries to talk her into telling Romeo about it.  She says no but she might change her mind.

The motive is unusual and Romeo almost loses his life to the killer.  Good thing Marie didn't stay in the car.

There is enough going on you hate to set the book down.  It's a bit of a sad read but justice wins in the end.