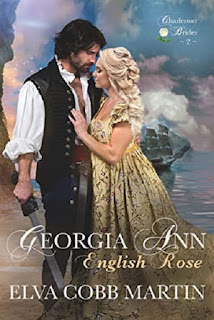 Georgia has two neighbor brothers that want to marry her.  She's grown into a beautiful woman.  She intends to marry Samuel but he goes away for two years to make enough money to live on.  The next news she gets is that his ship has sunk and he must have gone down with it...

Wild Heart Books let me read this book for review (thank you).  It will be published on November 17th.

Joshua tries to make her feel better and eventually asks her to marrry him.  She says yes guardedly.  She still loves Samuel but if he's dead she needs to move on.

Samuel is a slave on another ship, he's not dead.  Georgia is going to England to visit her aunt and uncle.  The boat she's on gets conquered by invading forces and suddenly she's a captive, too.  They are both on the same boat, so she finds out Samuel isn't dead.

You learn about how captives are treated, the warring nations of the time, and then Georgia gets kidnapped.  The stepbrother intends to marry her whether she wants or not.

Samuel comes after her and it gets a bit rough before the end.  She's going to end up  married but to which one?