A Tale of Mystery by Blake Severson 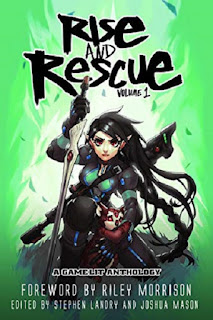 This story is one of those in the book Rise and Rescue Volume No. 1.  One of the guards has been killed and Derrick is going to find the killer.  He gets points for the things he does right so it's almost a game.  It's a deadly game though.

The first thing he runs across is a raccoon.  He feeds him and finally is rewarded with trust.  They adventure together.

He finds a hidden door and ventures into the dungeon.  The first person he meets and fights with is over soon and he continues on his way.  He finds more challenges along the way and then he finds the killer.  The killer has a surprise for him but he doesn't give up the battle.

They have magical powers and it really turns into a battle.  I was surprised by the ending but it was a good surprise.

This is just one short story in that book, which you can find on Amazon.  I enjoyed this tale!