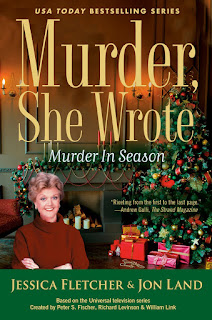 Jessica is waiting for her home to be finished after the fire so she's not upset when she sees a call from her contractor.  But she is after she talks to him.

Berkley and Edelweiss let me read this book for review (thank you).  It will be published November 24th.

He tells her he found a body when digging up her septic tank.  The sheriff and the doctor go with her and it turns out there are two bodies and a trunk in that hole.  Someone must have buried them recently because the tank had already been replaced once.  One body is really old.  The other is about a year old.  They gather the bones and tell Jessica she can check out the trunk.  She finds all kinds of journals.

As she reads them, she realizes the founding fathers didn't start their town with money they brought with them.  They were in the slave trade.

They had a TV host show up and he tries to interview them.  Then in a few days he's found dead in his hotel room.  What's going on?

As Jessica tries to sort out who may have done the murders, ahe finally concludes there is someone in the city who is a murderer.  She goes to brace him...