Never After: The Thirteenth Fairy by Melissa de la Cruz 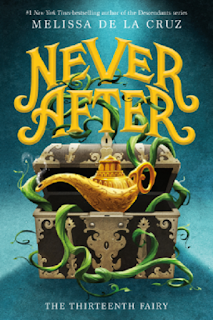 Filo has some bullies at school but she can't turn them in or the hazing will get worse.  So she suffers through it.  Her parents are very protective so she's surprised when they let her go to the bookstore by herself.  The worst part is that the last book in the series isn't there.  It turns out it never got written because the author died.

Roaring Book Press and Net Galley let me read this book for review (thank you).  It will be published on December 1st.

On the way home she is being followed by someone.  When she decides to confront him, she's amazed to see he's Jack, a character in the book series.  He says he's real and she needs to go with him to his world to help them get rid of a queen who is wicked.

She goes with him and they use a portal to go to the world the book talks about.  It's a land of ogres and trolls.  The queen keeps attacking other kingdoms and taking them over.  And Filo and her new friends must stop them.

This is a fun fantasy read with a few surprises added in.  You aren't sure if the good or the bad guys are going to win.  And Filo, who was adopted, finally learns who her mother was.

It was a good read.