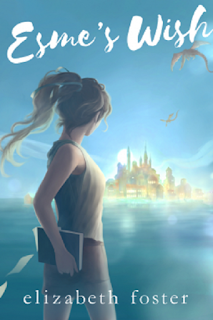 Esme's father is getting married again.  Her mother is missing, assumed dead because she was on the sea, and he's found a new wife.  Esme speaks against the marriage but no one cares.  Then her dad and the new wife go on their honeymoon.  That's when Esme finds the sister of the new bride is coming to stay with her.  The first day she takes down all her mother's artwork and puts up other pictures...

Esme doesn't have friends (her mother was her friend) but it doesn't take long to find some.  The boy takes her to the island where her mother was going all those months ago.  They search the whole island and find nothing.  But then she sees some caves and wants to search them.

This is where fantasy drops in on the story.  She finds a water passage and she falls in.  She expects to drown but she finds she breath in this water.  When she finds land again, it's the land in her mother's pictures.  She's mesmerized by the thought of retrieving the pretty pearl her mother painted.  The only problem is that there are monsters guarding it.  When she gets there, there's no pearl just her mother's necklace.  She grabs that and almost makes it out when one of the monsters scratches her leg.

She immediately starts reacting to the scratch so they have to get her to a doctor.  It's serious but the doctor saves her.  Then she continues to search for her mother.  She finds her but she's just barely alive.  Now Esme is going home to tell her father.  She doesn't know if he will come back with her or not...

The next book will answer that question.

This was a good read with plenty of excitement.