A Perfect Storm by Mike Martin 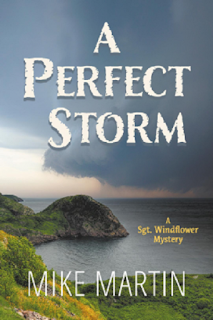 Windflower is back again and this case is even more dangerous.

The author and Net Galley let me read this book for review (thank you).  It has been published so you can grab a copy now.

The first thing that happens is that he goes into an abandoned business and the floor gives out and he's in a fairly deep hole.  There's no way he can get out by himself and it's a dead area for cellphones.  He has no idea how long it will be before someone finds him.  Luckily one of the other Mounties wants to talk to him, so he calls the receptionist who went home sick to find out where he was going.  He finds him and helps him out but he has to go the hospital.  He broke his arm in two places and twisted his ankle.  He doesn't stay in the hospital long but he has a long road to wellness.

The main focus of this story is drug running.  You wouldn't think a little town in Canada would have a problem with that, but that's why the drug runners went there.  It's peaceful there.  Then people start dying.  Anyone who talks gets killed.

The Mounties are bouncing around from one job to another, the White Aryan Brotherhood is involved, witnesses die and they are trying to get close enough to take some to jail.  It's very dangerous.

While all this is going on, Windflower's aunt dies and they have to fit a funeral in.

The way it turns out is amazing.  And the changes aren't over yet.  It will be fun to read the next book in this series.  It's not at all boring.