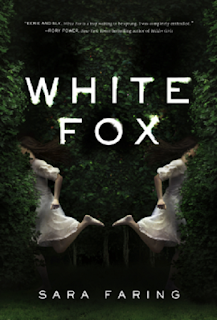 This is an eerie story with a touch of horror.  Two sister are atill wondering what became of their mother.  She disappeared ten years ago. Their father says he doesn't know what happened but he's passed on now.  One sister thinks she's dead.  One thinks she's alive.  Who's right?

Macmillan's Publishing Group and Net Galley let me read this book for review (thank you).  It will be published on September 22nd.

Their mother was an actress and when they finally arrive back home after the death of their father, they find part of a script.  It's called the White Fox and it based on an old fairy tale.  However, it's not complete.  They begin to wonder if their mother is the white fox and has gone back to the wild but decide that's too silly.

Their Uncle Teddy is taking care of them now and they think he's like a teddy bear.He's sweet and kind.  But behind that facade, he's more of a grizzly bear.  When they discover that, there only choice is to run and the only place to hide is in the forest.   He's relentless as a hunter and he finds them.  They run again.  And they find their mother...