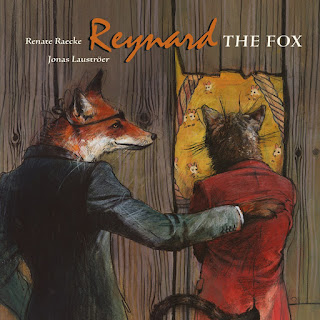 Reynard can talk himself out of anything.  Some of it is lies, but those listening don't know that.  When the King declares his peace days and invites everyone to come.  He listens to complaints and makes judgement.  It seems like everyone has a complaint against Reynard.  He sends his advisor out after him.

Mine Editions and Edelweiss let me read this book so I could review it (thank you).  It will be published on October 6th.

When the bear advisor returns, he's worse for wear.  The fox trapped him in a fallen tree by taking the wedges out.  He was looking for non-existent honey.  He loses some fur and looks pathetic.  So the King sends his cat advisor.

Reynard sends him on a quest to catch mice knowing there is a noose inside that will grab him.  He comes back with a noose around neck and looking all messed up.

Finally the badger says he will go.  He's Reynard's relative and anticipates better luck.  He gets him to come to the King's court.  He very modestly gives his account about what happened.  I swear, he can get away with anything.  The King invites him to be one of his advisors.

I bet the complainants are just shaking their heads...