Saddled with Murder by Eileen Brady 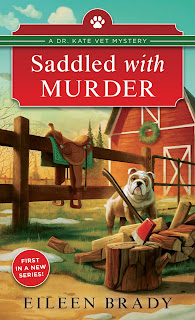 Kate is a vet but she can get caught up in a silly moment, too.  They are eating litter cake (looks like, doesn't taste like) and they ask her what she'd wish for.  She jokes she'd wish for her difficult clients to disappear and names them. The employee posts it on social media, but doesn't remove her damning words.

Poisoned Pen Press and Edelweiss let me read this book for review (thank you).  It will be published October 6th.

When she finds one of those customers dead in his chair, she's regretting her words.  Then another one shows up dead.  It's getting creepy...

As she worries and tries to figure out who killed then, her old boyfriend was beat up and come to stay with her while healing.  He's rather do a little more but she says no and sleeps on the couch.  Then her last boyfriend shows up again.  She's trying to solve murders, not solve her love life.

But when she thinks about it, there is more than one suspect.  Can she figure out who really did it?  Can she keep herself alive when she does?