The Girl Who Wasn't There by Vincent Zandri 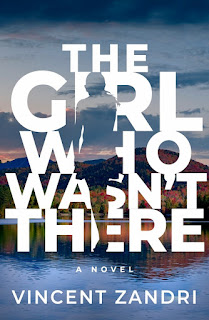 He's finally out of jail for the first time in ten years.  He was the driver and hadn't killed the family but he was the last one standing.  The whole time he was in prison, he had to watch his back.  His boss didn't want him leaking any facts.

Oceanview Publishing and Net Galley let me read this book for review (thank you).  It will be published October 13th.

He  goes a bit outside his parole boundaries to take his family to the lake.  While his daughter is playing with another girl, he and his wife retreat to the hotel room for hanky panky.  They are out in 15 minutes, but their daughter is gone.  Sidney can't stand that and immediately begins searching for her.

What he doesn't know is that even the ones he trusts are screwing him.  They want the money and they are willing to do anything to get it.  Sidney is a walking key.  His eye and the combination will open a vault containing massive amounts of money.

They are setting him up to go back to jail.  But Sidney isn't going.  More people die all along.  He discovers his wife had a lover while he was inside.  If no one is true to him, he's going to take his girl and go, as soon as he can find her...

Email ThisBlogThis!Share to TwitterShare to FacebookShare to Pinterest
Labels: Book Faerie, book review, The Girl Who Wasn't There, Vincent Zandri