No Ordinary Thing : The Tale of the Traveling Snow Globe by G. Z. Schmidt 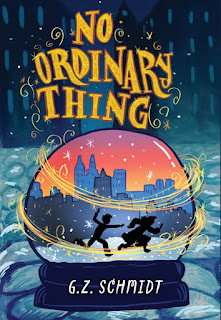 Adam is living with his Uncle since his parent's deaths.  They live above the Biscuit Basket and work in the bakery below.  Then a stranger comes in and tells Adam to check out the attic.  He shows him a snow globe and indicates there may be another up there.  The snow globe doesn't attract him all that much but the idea it was his parent's is enticing.

Holiday House and Edelweiss allowed me to read this book for review (thank you).  It will be published October 13th.

When his Uncle sends him up to the attic to look for things of value they could sell so they can pay the rent, he finds a snow globe.  He keeps that for himself and it's later in his room that he finds it has special properties.  He shakes it and finds himself taken to the scene in the globe.  It was snowing in the globe and soon he has snow falling on him!  It's a time travel globe!

He goes back in time to various years.  He wants to save his parents but he learns you can't change events.  He can't save them or stop a big factory fire.  But he makes friends as he goes.

Then he notices a man watching him.  He realizes he wants the snow globe.  Can he keep it safe or will he lose this wonder?  He's a dangerous man...