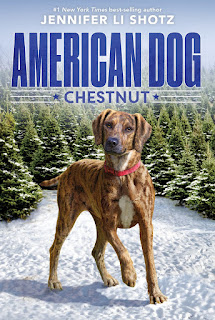 Chestnut got lost in the woods and was hungry for both love and food.  Meg is working with her family on the Christmas tree farm.  When she heads for home, she hears a dog whimpering and goes to look.  He's got his head stuck in the fence.  She gets him loose and then hides him in an outbuilding they don't use anymore.  She takes him food and water, loves him, and walks him when she can.

HMH Books for Young Readers and Edelweiss allowed me to read this book for review (thank you).  It will be published October 6th.

She asks again, but her parents say no to having a dog.  She lies rather revealing the truth and when the dog gets out and comes in the house, she's in big trouble...

They tell her it has to go to the pound.  As soon as they have delivered the dog there and she's home, she goes to visit her friend who has dogs.  He asks if they could foster a new dog.  His parents say yes, but not for long.  When they get to the pound, the lady tells them the dog has already been adopted.  As Meg feels her stomach sinking, she hears the lady say the dog had four white paws.  Her dog only had one and he's still there.

Then someone stole a bunch of their trees at the back of the property.  The sheriff says there's no way to prove who the trees belonged to, so don't expect recovery.  Meg takes Chestnut to the back of the property and has him track them to their house.  Then she starts for home but it's night, it's cold, the ground is rough and she falls.  Will her parents find her in the snow off the farm land?