Who Speaks for the Damned by C. S. Harris 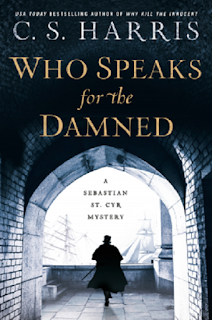 When a disgraced British nobleman is found dead in the tea gardens, Sebastian decides to investigate.  No one cares that he's dead other than the child he brought with him.   It's hiding on the streets with no idea where to go or what to do.  He and his wife try to find the child but have no luck.  Sebastian pursues the case.  What he learns is disturbing.

Berkley Publishing Group and Net Galley let me read this book for review (thank you.  It will be published April 7th.

He finds that the man has been treated badly his whole life.  When he and his love eloped, he was accused of kidnapping to save her from scandal.  When she had his baby, her father farmed it out to a wet nurse who used opium to keep the babies quiet and she killed it.

Then his brother commits suicide because the lady he loves was just using him.  He goes to confront her, gets in a fight with her husband, and she ends up dead.  Nicholas is charged for her murder even though he tries to tell them he didn't do it.  They send him away to a prison, where he gets beat and barely survives.  When the ship he's on goes down, he and a jailer end up on an island together.  He leaves the jailer's body after he's disfigured his face and heads to China.  After he's regained his health, he comes back home.

Sebastien thinks one of the men who betrayed him killed him.  Then the four suspects start to die.  Who's killing them?

Sounds a bit old fashioned - which is good. Thanks