In the Red by Christopher Swiedler 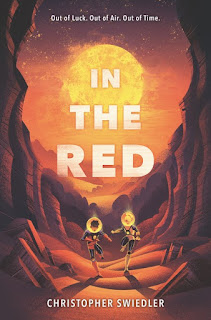 Living on Mars means you have to stay in the dome until you pass tests to let you venture out in space suits.  Michael's first test went badly.  He had a panic attack.  His father has tried to take him again to show him it's not bad but he's too scared to go out.

Harper Collins and Edelweiss allowed me to read this story for review (thank you).  It will be published March 24th.

Michael went to take another test but the beginner's class is already underway.  He joins the advanced class because the instructor told him he would give him the beginner's certification and he need not do the entire class.  He finds the class easy because he's good at math and he's studied a lot after he failed the first time.  The last test he has to do, he panics again.  He's been figuring out the course in his head when he could have used the equipment they carry.  The instructor is impressed.  Hardly anyone can figure it out in their head in the field.

When he meets his friend, Lilith, she takes him to an area he hasn't been to before and they go out in their suits.  She keeps him from panicking by asking him to solve math questions.  It works!  Then she asks him what the most daring and fun thing he'd like to do.  He says he'd like to visit his Dad at his station he works at.  It's a six hour journey with a sled but off they go.

They have to hide from the sun and that's hard to do.  There aren't mountains or caves.  Then there's a dust storm.  Then the magnetic field dies.  Conditions are getting worse and worse.  Then Lilith gets hurt.  He thinks he knows the way to go but he has to carry her with him.  When he finally reaches the station, it's abandoned.  What now?

This is an exciting adventure on a planet that is not friendly to humans.  Michael isn't that old but he learns to be a man before the story is over...