A Star is Dead by Elaine Viets 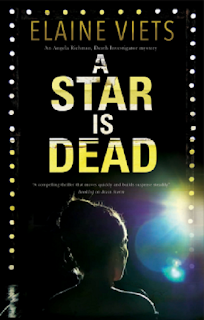 Jessica Gray is not a nice person but she's famous and people love her.  When she comes to a small town performance she makes snarky comments in private.  She also brings in three homeless women as part of her show and embarrasses them on stage.  So when she gets sick in the limo and dies no one is overly sad.  But when it turns out to be murder, it's even messier.  Someone doctored her kale juice with nicotine...

Severn House and Net Galley gave me the opportunity to read this book for review (thank you).  It will publish April 7th.

She wouldn't let anyone smoke around her, so they vaped instead.  That gives them plenty of suspects.  Then they find that she's married one of her employees.  He's moving up in suspicions.

Angela's friend, Mario, is arrested , mostly because he's Cuban.  The cop tells her to stay out of it but she knows Mario didn't do it.

She starts asking questions and some of the answers don't make sense.  Then one evening she almost gets run down in the parking lot.  She must be getting close.  Will she figure it out before they get her?