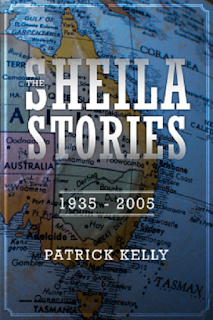 To get his girls to bed, he tells them Sheila stories.  Some are happy but some are sad.  He still tells them because they are the truth...

BooksGoSocial and Net Galley allowed me to read this book for review (thank you).  It has been published so you can get a copy now.

Sheila leaves home at eighteen.  She's got an inheritance so she's going to buy a farm.  She meets a lawyer on the train and when the property owner tries to make her sign the documents immediately she says no.  She wants to take the papers to her room and read them over.  Then she takes the papers to the attorney.  He writes a new contract and is with her when the property owner comes to pick up the papers.  He tells him the other contract would have given his property back in short order and he could have kept the down payment.  Now he's signing a real contract.  He doesn't want to but the lawyer mentions talking to the newspaper, so he does.

She also inherits the aborigine workers there.  They work, are diligent and soon she's part of the family.  When she decides to move again, she leaves them in charge of the farm and gives them half ownership.

She keeps adding to her property.  She also serves as an ambulance driver in WW1.She marries her love, only to lose him later in the war.

She marries again and he's a jounalist trying to get his novel published.  He does and moves to California to write a script.  He comes home occasionally but he's gone more than home.  Then she finds out he's been sleeping with a movie star.  That marriage is over.

Time goes on and meets another man and marries.  She still loves her first husband the most but she's always starting new businesses and doing well.  She's happy for the most part but she regrets those she's lost.

Posted by Journey of a Bookseller at 1:20 PM