I Am a Promise by Shelly Ann Fraser Pryce 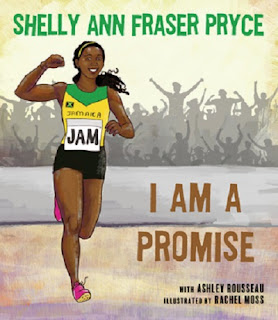 This a picture book for young readers.  It's the story of a young girl who loves to run.  She runs everywhere she goes but she doesn't think anything about it.  It's just fun!

Black Sheep books sent me an ARC of this book to read for review (thasnk you).  It will be published on February 4th.

Her grandmother tells her she is a promise but she doesn't understand why.  As time goes on, she gets faster and begins to think of racing.  Shelly Ann was the fastest woman in the world in 2012.  She's a six-time Olympic medal winner.

Rachel Moss did the illustrations.  When you see Shelly Ann pulling away from the other racers, it was exciting and made me proud.

Do you have a runner in your family?  Maybe they are a promise, too.

Do whatever you do to the best of your ability and it will give you pride even if you don't win medals...