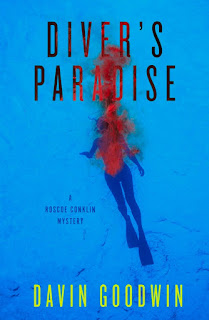 Roscoe has retired from being a cop and now lives in the sun in the Caribbean.  He remembers his old partner fondly and they had been talking about visiting.  Then he gets a call from his old precinct telling him that his partner and his wife have been gunned down in their home.  He asks for details but he's not part of them anymore.  It was just a courtesy call.

Oceanview Publishing and Edelweiss allowed me to read this book for review (thank you).  It will be published April 7th.

Roscoe assumes it has to be tied to an old case they filed.  As he tries to figure it out, more people die.  The killer doesn't care how many he kills.  Anyone associated with the case is being picked off.  When his Wrangler is borrowed by his girlfriend and she ends up in the hospital, he knows the killer is after him.  Will he be able determine who the killer is before he's dead, too?

The final confrontation is very explosive and you aren't sure who is going to win...