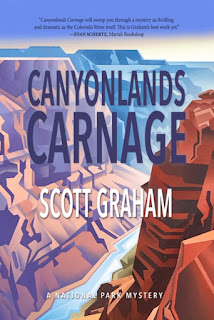 They are going whitewater rafting.  Everyone is experienced for the most part.  But it's not as fun as it should be because members of the party start showing up dead.  Who is killing them and why?

Torry House Press and Edelweiss Let me read this book for review (thank you).  It will be published September 7th.

The first one to die is their most experienced host.  They think he died from natural causes until Clarence says he thinks he was murdered.  Then a woman guide dies from a rock hitting her head.  Chuck checks it out and concludes that was murder, too.  Then Leon is pushed off a canyon wall and breaks his neck.  The man he was fighting with said he was trying to kill him.

It gets worse when Chuck's family shows up.  They came to give him a warning from the Indian they know.  Chuck is afraid one of them might become the next victim and he and Clarence protect them through the night.  They would have gone back home but all the truck tires were slashed.

The next day, Chuck figures out who the killer is.  Will he be able to stop him?