Last Viking, The : The True Story of King Harald Hardrada by Don Hollway 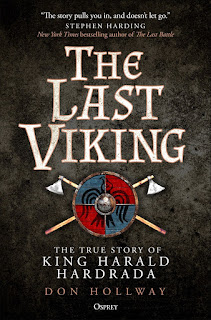 This is a book of war.  You learn about the boy who grows into a man but mostly all the Vikings did was fight.

Osprey Publishing and Edelweiss let me read this book for review (thank you).  It will be published September 7th.

This man didn't get to be King for a long time, but he managed to get married and have children.  He had more than one wife.  The first one only had girls and he needed a son to inherit.

They do terrible things to their prisoners.  They fight with swords and axes.  This is combat up close and personal and everybody gets injured somehow.

This set in the 1040's on.  No modern devices just strength and anger are their weapons.  Even if they were friends before some slight can make them enemies.  If they aren't punished immediately, they go on the enemy list.

All the brave ones seem to die but they don't mind because they died with honor.

It seems the wars never ended in that era.