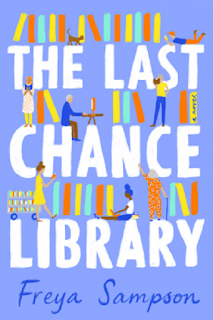 June loves her library and the people she knows.  But she's shy and almost dies when she has to speak in front of a crowd.  Her mother ran the library before her so she has lots of memories.

Berkley and Net Galley let me read this book for review (thank you).  It will be published on August 31st.

June has not traveled far from her hometown but she's content.  Then she learns that the council is planning to shut down several libraries and hers is one of them.

There are protests, they even take over the library by occupying it.  But it doesn't matter.  After the activities she's participated in, June gets brave enough to tell her suspicions to everyone.  Unfortunately that happens at a wedding.  It creates a big disturbance and that's when June realizes her boss didn't know her husband's plans.

It turns into a real mess but it does get straightened out.  It's not all sweetness and light but neither is life...