Murder in an Orchard Cemetery by Cora Harrison 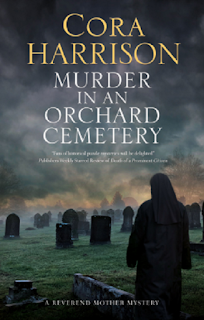 Sister is surprised to hear the sound of a bomb outside the convent.  She was on retreat and not fond of political candidates being there as well.  Now one of them was dead.

Canongate and Net Galley let me read this book for review (thank you).  It will be published on September 7th.

The body was in pieces but they knew who he was.  Was it the IRA?  Who killed him?

The sisters work on trying to make sense of it.  It was a homemade bomb and they learned how it was done.

Every path taken ends up being a dead end.  Then his daughter who has diphtheria and is a nun confesses.  Is it the truth?