The Moscow Affair : A Nicole Graves Mystery by Nancy Boyarsky 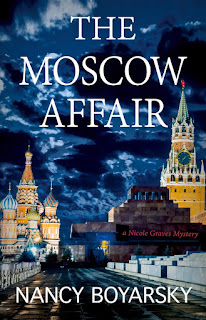 She's a private investigator until her boss promotes her to office manager.  She doesn't like her new job so when another opportunity pops up, she accepts it.

Light Messages Publishing and Edelweiss let me read this book for review (thank you).  It will be published on September 21st.

She's going to take a cruise and observe some people the government has interest in.  She has vacation coming and she thinks this might be the work of her boyfriend, so she says yes.  She's taking a cruise to Russia.

She's only been on the boat for a day when another woman asks to sit at her table at dinner.  She says yes and then can't get rid of her!  She's not a bad person but she seems to be mixed up with the folks she's watching.

As she observes them, she sees them throw one of the group off the boat.  He drowns.  She wonders what she's gotten in to...

It gets more and more dangerous the further the trip goes.  She witnesses a plan to bomb Putin.  Things get real serious and there is one cop that thinks she's involved.  Then her boyfriend shows up.  He's part of M16.

You aren't sure who is going to live and die as the story goes on.

It sure holds your attention.