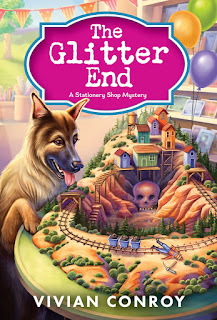 Delta is living in a small town where everybody knows everybody else.  Things are going along nicely until she finds the dead body...

Poisoned Pen Press and Edelweiss allowed me to read this story for review (thank you).  It will be published on September 28th.

Delta and her partner, Hazel, ask a miniature artist to show off her display in their store.  When it gets there it's a lot bigger than expected, but they put it in place anyway.

The dead man was seen arguing with the miniature artist.  Turns out that he was her husband.  They didn't live together.

He was guilty of running a pyramid scheme and everyone thinks his wife knows where the money was hidden.  Not true.

Delta and her boyfriend work on solving the case.  He's no longer a cop but he can still get useful information.

The killer is a surprise.  And he's not through killing yet...