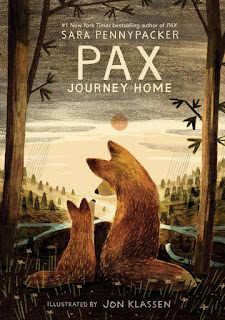 As a boy, Peter took in a baby fox and raised him.  Pax was wonderful but as things happened in the boy's life, he took him into the woods, threw his toy, and sneaked away.

Balzer + Bray and Edelweiss let me read this book for review (thank you).  It will be published on September 7th.

Pax finds himself a mate and they have a family.  The water they are drinking isn't healthy for them and it really affects the babies.   Peter has joined the crew that is cleaning the water up.

Peter has lost both his mother and father.  He's a teen but he still wants to go home.  He doesn't realize that Pax is there with the worst of the babies.  He enjoys playing with Pax but he's not enthused about raising another fox baby.  However he takes the poor thing in.

Both Peter and Pax have lost parts of their families.  Despite that, it's a fun book to read and there might be more to the story yet...