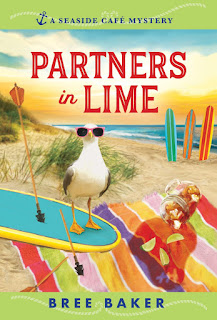 Everly has her tea shop running fine and she enjoys her detective boyfriend. She just has one bad habit, she gets involved in murders.  She says it's to help him but she likes solving mysteries.  If only it wasn't so dangerous...

Poisoned Pen Press and Edelweiss let me read this book for review (thank you).  It will be published August 31st.

There's a new guy in town who is a surfing champion.  He's not the nicest person but he enjoys being No. 1.  Then they find him dead with an arrow in his back.  That means the cop suspects Matt who uses a crossbow and had argued with him the night before.  Everly knows he didn't do it so she starts asking questions.  Her boyfriend tries to make her stop but to no avail.

She gets a warning from the killer to stop looking but she doesn't listen to him either.   As time goes on the threats increase in intensity.

Then when she's alone, she finds out who the killer is and he kidnaps her.  Will she survive?