The Lady and the Highwayman by Sarah M. Eden 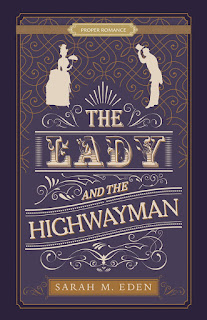 Elizabeth Black runs a girl's school and writes the appropriate books for a lady to write.  No one knows that she also writes the Penny Dreadful series by Mr.  King.  She's very careful to keep it that way, too.

Shadow Mountain and Edelweiss let me read this book for review (thank you).  It has been published and you can get a copy now.

This book is divided into two stories.  One is about Elizabeth and the other is a Penny Dreadful.  It's great fun to read.  Elizabeth meets a man who works on saving the homeless children.  One boy is being abused by his master so she helps him to get away.  He puts him in his school but the man who had him is trying to get him back.

Fletcher began in the same way as these children and he managed to get out of the gutter.  He wants to help the ones he finds.  Elizabeth gets the girls for her school and he puts the boys in his.  But the people who don't sympathize with the children's plight are determined to shut them down.  They begin by torching Elizabeth's school and then try to torch the other one, too.

While this is going on, the Penny Dreadfuls have a monster in the woods in one story and a vampire in the other.  I see why they sold so well!

Fletcher and Elizabeth might be from different walks of life but their goals are the same.  And it doesn't take long until they are falling in love.  Will she ever tell him who Mr. King is?

Love the cover too! Thanks