Now You See Them by Elly Griffiths 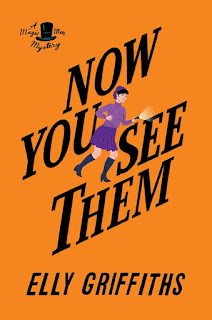 Edgar is happily married and has been promoted to Superintendent.  He and Emma have three children.  But Emma is missing her detective time.  She was one of the best on the team but she can't be a mom and a cop, too.  Max has married and lives in America now.  He has children of his own now.  He's back in England  for a funeral.  That's where he and Edgar meet up again.

Houghton Mifflin Harcourt and Edelweiss gave me the opporttunity to read this book for review (thank you).  It will be published December 3rd.

There are missing girls in the city.  One of them belongs to an important man who thinks the police are ineffective, or maybe stupid.  Otherwise they could find his daughter.  This is in the middle of a big weekend with a lot of tourists and rowdy folk.  His daughter is not their only concern.  They also don't know if she was kidnapped.  Maybe she left on her own.  Then another girl goes missing.

It really comes to a head when they find one of the missing girls dead.  The search gets much more serious.  While Edgar is all tied up with that, Emma sets herself up as bait.  He has a brunette, a redhead, and a black haired girl.  Next he will be after a blonde.  She's a blonde.  But her trap doesn't work and Edgar is very angry about it.

Max's daughter has been taken.  Then Emma realizes that her daughter has become a victim of the same kidnapper.  She's stung with guilt and goes after her herself.  She's trying to find Edgar to tell him but he's out with others trying to keep the peace.

It gets complicated and exciting with all the various characters coming together from various areas to save the girls.  The kidnapper has a gun but Max doesn't...

I enjoy this Magic Men series.  You never know what is going to happen next.