How The Dead Speak by Val McDermid 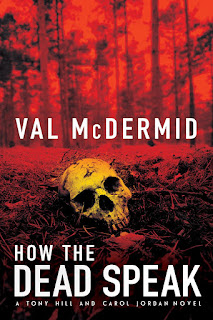 Tony is in jail, Carol is no longer a cop.  But the dead still speak to them.  The police unit they left behind has some problems but they are working hard on their cases.  And they have several cases.

Atlantic Monthly and Edelweiss allowed me to read this book for review (thank you).  It will be published on December 3rd.

He's trying to establish prison programs to enable the inmates to move on when they have served their time.  Trying to give them reading lessons, teaching them to meditate, and other world skills they've missed out on.  Carol is working with a group of lawyers who are trying to get innocent people out of prison.  They are finding new directions but they miss each other.  Tony has told her not to come for visits.  He thinks it will make him feel worse but it hurts Carol.  She'd like to see him and talk to him.

Carol talks to a prisoner and decides he's telling the truth:  he didn't kill the missing  man.  Now she has to see if she can find the missing man.

The squad has their hands full.  A contractor at an old school run by nuns years ago has found a skull in the front yard.  Suddenly it turns into 40 skulls in the front yard.  Some old, some newer.  Then a cadaver dog finds boys in the vegetable garden of the neighbor.  He was the school's maintenance man and he admits to burying the young girls that died at night in the front yard.  Both he and the head nun said it was because they had no one to care about them so they buried them.  The body in the garden was male, and there were eight of those.He tries to blame it on the priest but that doesn't go far.  Then he clams up.

The new boss of the squad is harassing the women.  He's giving everyone problems so they appeal to those higher in other areas to get help.

Then Tony gets hurt in jail and ends up in the hospital.

Despite all the various cases and troubles, the author brings it all together before the end of the book.  Her books are always a good read.