Risk It All by Katie Ruggle 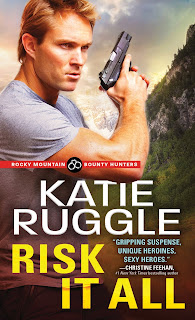 Cara has always been a researcher in the agency.  Her sisters are the bounty hunters.  But they're busy and the agency needs money.  She goes out after a big ticket man and thinks she can nail him down and sic one of sisters on him.  Unfortunately, he notices her surveillance.

Sourcebooks Casablanca and Edelweiss allowed me to read this book for review (thank you).  It will be published December 31st.

When she tries to get away, she almost got hit by a car.  Whoever it may have been, it was no accident.  He grabbed her and moved her out of the way and then asked her why she was watching him.  She said he must be mistaken but he knows their agency and knows why.  He said he wasn't guilty and for some reason, she believes him.

Then she picks another man and starts looking for him.  Henry asks her why and says he's dangerous even if it didn't seem that way.  The second man is after Henry and she ends up along for the ride.  There are grenades, Henry almost drowns in the river, and lots more action trying to stay alive.  In between all the attempts on their lives, they manage to fall in love.

They turn in the man who was trying to kill them and Henry turns himself in.  She knows he didn't do it so she keeps investigating.  Then she finds herself in an alley looking down the barrel of a gun.  She could sure use Henry now...
Posted by Journey of a Bookseller at 8:00 AM