Ghosts of Painting Past by Sybil Johnson 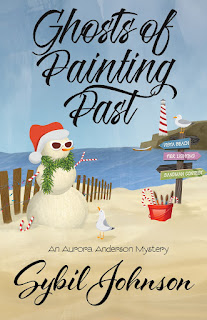 Rory is getting ready for the Christmas craft sale and feeling pretty jolly herself.  They are tearing down the house across from her and the landmover is noisy.  When they shut it down and gather around something they have found, her jollies go away.  It looks like a skull...

Henery Press and Edelweiss allowed me to read this book for review (thank you).  It will be published November 19th.

Her boyfriend is on the case and he won't tell her much about it.  It turns out to be a young man everyone thought had left on a surfing trip after his graduation.  They hadn't heard from him but everyone thought he was chasing the waves and having a good time.

This is a small town where everyone knows everyone else and there are few secrets.  Rory finds out her father was a surfer, too, and that he and the victim had an argument at the graduation party.  Soon he's a suspect in the case.

She visits all the old folks and gets an idea of what life was like back then.As she gets closer to the truth, she also gets closer to danger.  One man's car is is hit and he gets a bit hurt.  Her father is hit and ends up in the hospital.  She's getting more desperate to find the killer.  It's a tangled path but she manages.

The killer surprised me.  Did you guess who it was?
Posted by Journey of a Bookseller at 8:00 AM