A Madness of Sunshine by Nalini Singh 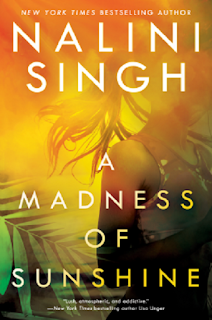 She's moving back to New Zealand to escape the life she used to lead.  She just became a widow and found out her husband wasn't true to her at the funeral.  She had no clue so she came back home enen if her Mom wasn't there anymore.  She meets her classmates from long ago and is happy to see them.  She also meets the police chief.  He's an outsider so the community doesn't really let him in.  They just tolerate him.

Berkley and Net Galley allowed me to read this book for review (thank you).  It will be published December 3rd.

All is going well until a pretty young girl disappears while doing her morning run.  Then she finds out three others went missing years before.  Does the community have a serial killer in its midst?

She works with the cop gathering information the locals will tell her but not him.  He sets up searches and the neighbors rally to fill the search parties.  They cover the ground twice but find no sign of the missing girl.

This is a good mystery.  It takes a while until they determine the killer and the poor widow almost becomes his next victim.  In the meantime, the cop doesn't think he killed the young woman so he's on the search for another killer.  This quiet little town is deadly...
Posted by Journey of a Bookseller at 8:00 AM