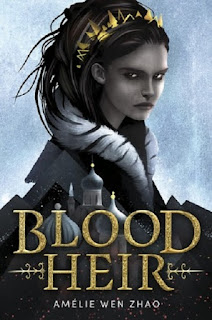 She has a secret, a big secret.  She has a dangerous Affinite.  So her father has kept her hidden in behind the castle walls.  But when someone poisons him, they accuse her of murder and she must run...

Delacorte sent me an ARC of this book for review (thank you).  It will be published November 19th.

This is the first in a new series and the story is full of danger and action.

She goes to find the king of the cons.  He's jailed but she intends to get him out.  The route they take for escape includes jumping into a fast flowing river.  She's afraid she will drown.  He bumps her in the water and follows.  He has to aid her to the shore.

He agrees to help her find her father's killer.  She agrees to his terms but doesn't realize he's planning to betray her.  As they make their way back to the castle, they run into other Affinites who are dangerous to them.  They fight, they take turns saving each other, and they survive.

He begins to wonder if he could change.  He knows he took the wrong road earlier in his life.  The longer he's with her, the fonder he gets.

When she finds out who killed her mother and father, she intends to tell the kingdom the truth.  It backfires on her and they are on the run again.  But she's not giving up.  She'll be back.

I want to read the next book in this series!