Puddin' on the Blitz by Tamar Myers 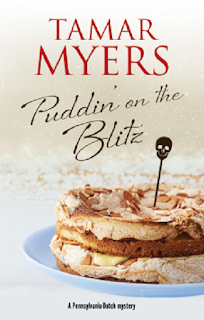 Severn House and Net Galley let me read this book for review (thank you.  It will be published December 3rd.

It starts as an Asian/Amish restaurant and it goes real well at the start.  There are lots of customers, reservations are taken in advance and the restaurant is always full.  Then the newness and charm wear off.  She'll have to some up with a new idea.

She and her mother-in-law don't get along.  Mom thinks she stole her son and she'd like to run Magdalena's life.  She's also like to be head chef at the restaurant but Magdalena already had one picked out.  That creates more static between them.

Then a couple from a famous magazine want to come and see her new restaurant.  She cancels reservations so they are the only guests.  Her husband gets food from the restaurant and then puts it in their glassware so the guests won't know.  They eat well and enjoy the desserts (which is now the restaurants specialty).  Unfortunately, in the morning, the woman is dead.  Magdalena finds herself in jail because she was poisoned.  How did that happen?

It turns into a real mess.  She was killed by mushrooms.  They are common mushrooms and they can be used in different ways to cause death.  Then Magdalena finds out they both were frauds.  The magazine is defunct.  So who are they?  And why did she have to die?

Magdalena finally tracks the truth down but in the final stand off, the killer is threatening her two year old.  Can she figure out what to do next?